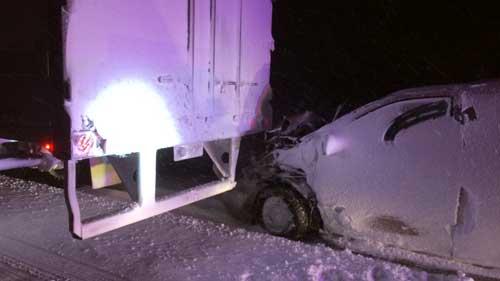 (CNN) -- A Michigan family is safe after the minivan they were in became lodged underneath a semi-trailer truck and dragged for 16 miles through a snowstorm.

"I just want to get off the back of this thing," Pamela Menz can be heard telling a 911 dispatcher.

Pamela and Matthew Menz, along with their adult children Justin and Jennifer, were traveling northbound along Interstate 75 early Wednesday morning, when their 2001 Toyota Sienna plowed into the back of the semi.

"The truck driver had no idea they were back there," Roscommon County Undersheriff Ed Stern said.

Matthew Menz, who is a truck driver himself, told the 911 dispatcher the truck was in the middle of the road, "going about 2 miles an hour," without flashing hazard lights.

There was "no warning whatsoever," Matthew Menz told the 911 dispatcher, ''I'm just blown away at how slow the truck was going."

The impact shut down the Menzes' vehicle, disabling the heater and preventing the family from sounding the horn. A shattered windshield, along with near-whiteout snow conditions, prevented Pamela and Matthew Menz from giving the dispatcher a clear description of the semi or their location.

The vehicles were later intercepted by deputies from the Crawford County Sheriff's Office, an entirely different county from where the incident began, according to a police press release.

Justin Menz, 26, flew forward in his seat when the van hit the semi, causing minor injuries. The family was transported by ambulance for evaluation, but none of their injuries were expected to be serious.

Their van, on the other hand, well, that's another story.