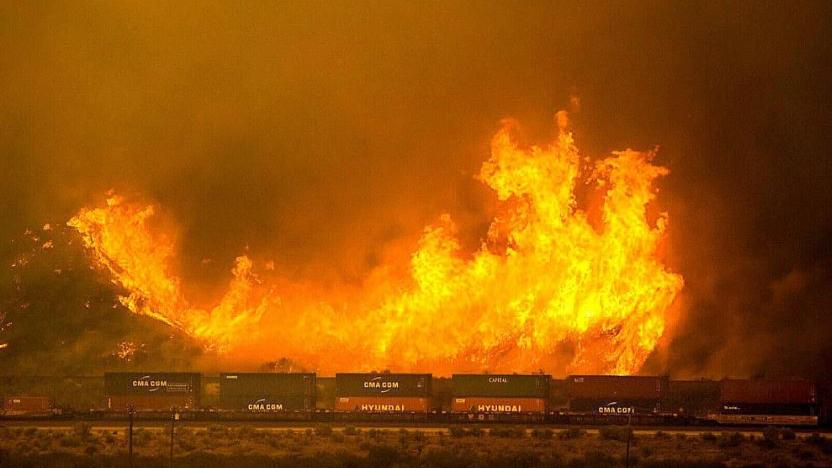 The size of the fire is roughly 28 square miles.

Some 82,000 residents in San Bernardino County are under a mandatory evacuation order because of the fast-growing wildfire, a Cal Fire spokesman said.

Fire authorities warned of "imminent threat to public safety" as 0% of the fire had been contained as of Tuesday night.

The massive fire, which is being called Blue Cut, prompted Gov. Jerry Brown to declare a state of emergency in the area.

The blaze started about 10:30 a.m. Tuesday in Cajon Pass, a mountain pass between the San Bernardino Mountains and the San Gabriel Mountains. The area is about 70 miles east of Los Angeles.

An estimated 34,500 homes are affected by the evacuation warnings which affect Cajon Pass, Lytle Creek, Wrightwood, Oak Hills and surrounding areas. Seven hundred firefighters have been sent to the area.

Earlier in the day, six firefighters were trapped by the wildfire, but were able to find shelter at a nearby structure, according to San Bernardino County Fire. Two of them suffered minor injuries, but were later released and returned to the fire line.

The fire quickly scorched up the dry hills as winds carried the embers. It fed on the thick, parched brush and engulfed homes.

One resident told CNN affiliate, KABC that she was there when the flames were all around.

"We had to keep the windows up because we couldn't breathe. The smoke was so thick, and as soon as the smoke cleared, we could see that everything was gone," Crystal Armstrong, who lost her home in the fire, said.

Firefighters implored residents to evacuate, saying that refusing to do so puts their lives and other people's lives at risk.

Aerial views showed the mountains covered in plumes of smoke.

Drought-stricken California has been hit with waves of wildfires this summer, fueled by dry conditions, heat and dead brush.

Before the latest Blue Cut Fire broke out Tuesday, 8,000 California firefighters had already been battling eight large wildfires across the state.