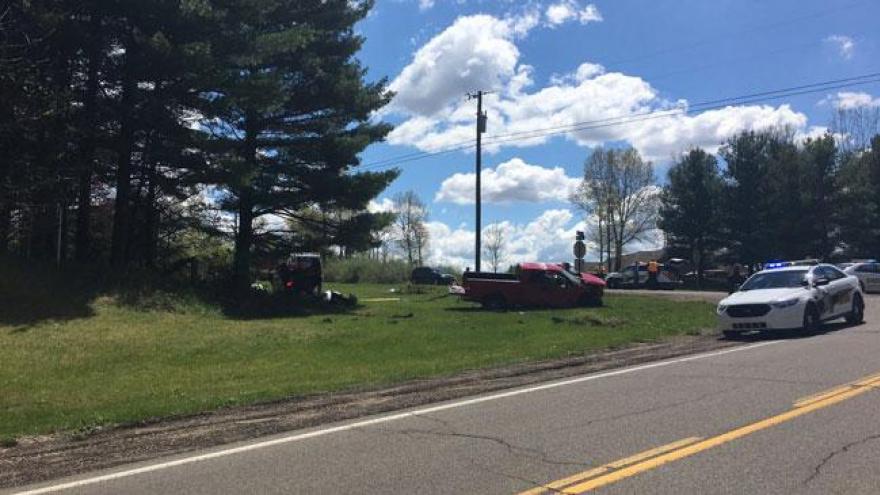 A 16-year-old girl was killed in an accident at Pine Lake Street and Dailey Road in Edwardsburg Tuesday just before noon.

Police say a white SUV was traveling north on Dailey and the red truck was traveling east on Pine Lake when the accident happened.

A medical helicopter was sent to the scene, but the driver, 16-year-old Makayla McKenzie of Edwardsburg, died before she could be transported to the hospital.

Passenger 16-year-old Camryn Raab and passenger 17-year-old Hannah Philpot, both of Edwardsbug, were injured in the accident and transported to Memorial Hospital.

"Three passengers inside the white SUV were injured. One is deceased. And the driver of the truck has also been transported to the hospital for injuries," said Cass County Undersheriff Richard Behnke.

Behnke says the driver of the pickup truck, 25-year-old Jeffrey Jackson, failed to stop at the stop sign. He was also injured in the accident and transported to the hospital.

"There’s proper signage for this intersection. There’s good visibility if you do make a stop. And it is disappointing that people don’t take the time," Behnke said.

Raab has since been released from South Bend Memorial Hospital.

As of Wednesday morning, Philpot was still in the hospital, according to the Cass County Sheriff's Department. Her condition was not released.

Behnke says he will refer the case to the prosecutor's office.