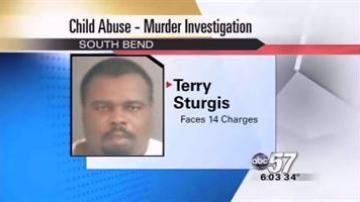 SOUTH BEND, Ind. – Terry Sturgis the father accused of beating his son to death appeared before a judge on Wednesday morning.

Sturgis who is still in custody will undergo examinations by three doctors to evaluate his sanity.

The judge appointed three different types of doctors in case there was ever need for a tiebreaker: a psychiatrist, psychologist, and medical doctor.

The judge appointed Dr. Brian Sucharetza of Mishawaka, Ind., Psychologist Jennifer Cummings, and Psychiatrist Melvin Seglin.
The judge told Sturgis before he left the courtroom that he was going to be meeting with a lot of doctors before he returns to court.
His next court date is set for February 29th.
Sturgis is charged in a 14 count Criminal Information in the death of his 10 year-old son, Tramelle Sturgis, and for the battery of his 14-year-old son.