Father of murdered teen speaks out 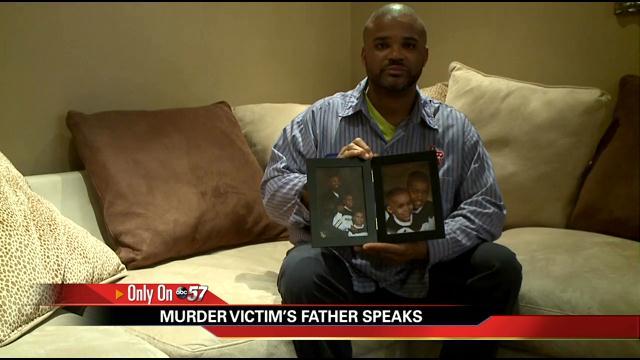 Metro Homicide is asking the public for help finding the suspect in a 2010 cold case. Police said 23-year-old Dionte Calhoun is wanted in connection to the murder of Bernard Vaughn.

Vaughn's father said he's forgiven whoever killed his son, and he wants justice.

Bernard Vaughn Senior said, “I would say as a father, it takes more of a man, to say that I forgive you. I totally forgive you.”

In July of 2010, Vaugh Jr. was shot and killed in a trailer at a mobile home park off of Maylower Road in South Bend.

Vaughn said he wants Calhoun to turn himself in peacefully so no one else gets hurt.

In a press conference on Tuesday Metro Homicide released a court affidavit that said police believe Calhoun killed Vaughn, then took his drugs and money.

His father said it's difficult that all of this is resurfacing.

Vaughn said, “He was just a kid, a troubled child. He wasn't an angel, but he was my angel.”

Vaughn said a conviction won't bring his son back to life. He said he is praying for the suspects family.

Metro Homicide attributed this development to the breakup of a gang known as the ‘Cash Out Boys.' Vaughn said he knew of his son's connection to this group. He was battling in court for full custody of his son so he could help him.

Vaughn said, “I knew it. I explained to his mother what was going on, from the part of selling drugs, breaking in houses, being in a gang.”

Vaughn said if there's a silver lining in his son's murder, it's that he now helps other fathers who are struggling to gain custody of their kids.

Vaughn said, “I believe God is using me to encourage other men to be a better father in your kid's life, and to never give up the fight for your child, because my child, he'll never come back, I'll never see him again. I have just one left.”

If you have any tips on where the suspect Dionte Calhoun may be, call Metro Homicide. Police believe he is armed and potentially dangerous.