Father's First Group working with police to stop the violence 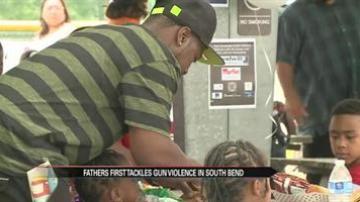 SOUTH BEND, Ind.-- The Father's First Group launched their initiative on Sunday to provide mentoring for young and single fathers in the community.

Chief Teachman said, “That’s why I say it’s so important for South Bend to raise all of our children together because gangs will come in and fill the role of family when there isn’t a strong enough nuclear, extended, or community family.”

The Father's First Group held a picnic on Sunday for single fathers who want to support each other.

Chief Teachman said, “It’s particularly important because fathers who have been away from their kids because they’ve been incarcerated or they’ve had to leave the area because of work, they struggle to try and build that relationship. But to have a peer support network to talk to other dads who recently reengaged with their sons and daughters, they can learn from that experience and realize they aren’t alone.”

The founders of the group plan to have the picnic every year.

Lachelle Barnett said, “Not having a father has shaped me in a lot of ways, and its been a struggle and I don’t want other people to have to go through that struggle if they don’t have to.”