FBI agent: My work has never been tainted by political bias 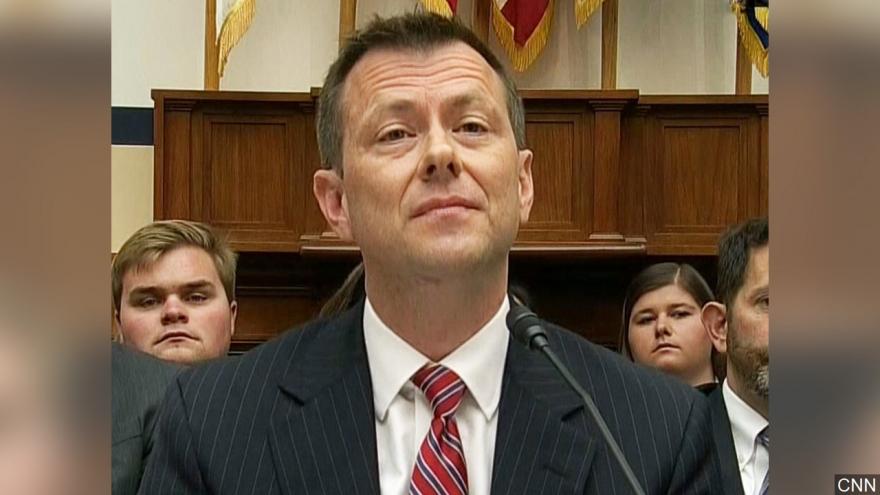 WASHINGTON (AP) — An FBI agent whose anti-Trump text messages fueled suspicions of partisan bias told lawmakers Thursday that his work has never been tainted by politics and that the intense scrutiny he is facing represents "just another victory notch in Putin's belt."

Peter Strzok, who helped lead FBI investigations into Hillary Clinton's email use and potential coordination between Russia and Donald Trump's campaign, was testifying publicly for the first time since being removed from special counsel Robert Mueller's team following the discovery of the derogatory text messages last year.

In his opening statement, Strzok said he has never allowed personal opinions to infect his work, that he knew information during the campaign that had the potential to damage Trump but never contemplated leaking it and that the focus on him by Congress is misguided and plays into "our enemies' campaign to tear America apart."

Republican members of the House judiciary and oversight committees were expected to grill Strzok for hours as they argue that the text messages with FBI lawyer Lisa Page color the outcome of the Clinton email investigation and undercut the FBI's ongoing investigation into Russian election interference.

Trump himself has launched personal attacks against the two FBI officials, including a Wednesday evening tweet that asked "how can the Rigged Witch Hunt proceed when it was started, influenced and worked on, for an extended period of time" by Strzok. He described the texts as "hate filled and biased."

Judiciary Committee Chairman Rep. Bob Goodlatte, R-Va., asked the audience to imagine being investigated by someone who "hated" you and "made crucial investigative decisions on how your case should be treated and eventually adjudicated."

"Would anyone sitting here today believe that this was an acceptable state of affairs, particularly at an agency whose motto is "Fidelity, Bravery, and Integrity?" Goodlatte asked.

Strzok acknowledged that while his text message criticism was "blunt," it was not directed at one person or political party and included jabs not only at Trump but also at Clinton as well as Sen. Bernie Sanders. He said there was "simply no evidence of bias in my professional actions."

"Let me be clear, unequivocally and under oath: not once in my 26 years of defending my nation did my personal opinions impact any official action I took," he will say.

He says that he was one of the few people during the 2016 election who knew the details of Russian election interference and its possible connections with people in the Trump orbit, and that that information could have derailed Trump's election chances. "But," he said, "the thought of exposing that information never crossed my mind."

Although Strzok has said through his lawyer that he was eager to tell his side of the story, he makes clear his exasperation at being the focal point of a congressional hearing at a time when Russian election interference has been successfully "sowing discord in our nation and shaking faith in our institutions."

"I have the utmost respect for Congress's oversight role, but I truly believe that today's hearing is just another victory notch in Putin's belt and another milestone in our enemies' campaign to tear America apart," Strzok will say, according to the remarks. "As someone who loves this country and cherishes its ideals, it is profoundly painful to watch and even worse to play a part in."

He also flatly rejected the president's characterizations of Mueller's work and the threat of Russian election interference, saying, "This investigation is not politically motivated, it is not a witch hunt, it is not a hoax."

The sharp tone of Strzok's statement sets the stage for a contentious hearing following hours of closed-door questioning last week. It also reflected an effort to shift attention away from the content of Strzok's texts and onto what he says is the more pressing issue: the Russians' "grave attack" on American democracy and continuing efforts to divide the country.

But that's unlikely to be the focus of Thursday's hearing. Republicans eager for ways to discredit Mueller's investigation have for months held up the texts from Strzok and Page to support allegations of anti-Trump bias within federal law enforcement.

One message that has received particular attention, and is likely to be discussed at the hearing, is an Aug. 8, 2016 text in which Strzok, discussing with Page the prospect of a Trump win, says, "No. No he won't. We'll stop it."

The Justice Department's inspector general has criticized Strzok and Page for creating the appearance of impropriety through the texts. But the report said it found no evidence of political bias in the FBI's decision to not pursue criminal charges against Clinton. And many Democrats say actions taken by law enforcement during the campaign season — including announcing a reopening of the investigation into Clinton just days before the election — actually wound up harming the Democratic candidate and aiding the Republican candidate, Trump.

FBI Director Chris Wray says the FBI has referred to internal disciplinary officials employees who were singled out for criticism in the inspector general's report. Strzok's lawyer has said he was escorted from the FBI building last month as the disciplinary process winds its way through the system.

Page left the bureau in May. House lawmakers subpoenaed her to appear for a private interview and warned her that they would begin the process of holding her in contempt if she does not show this week. Goodlatte told CNN that Page had agreed to appear Friday.