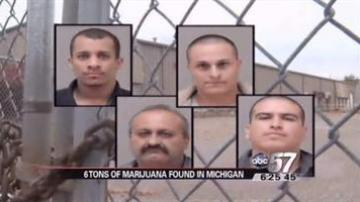 MICHIGAN.-- It's one of the largest drug busts ever in the state of Michigan.

Federal agents recently seized six tons of marijuana from a warehouse outside Grand Rapids, that's worth about $6 million.

The DEA thinks the drugs came from Mexico, and dealers are "testing out" Michigan cities as possible distribution points.

So far four men have been arrested, but the feds say there will likely be more.

Earlier this week, the DEA found 5 tons of marijuana in an Indianapolis warehouse.