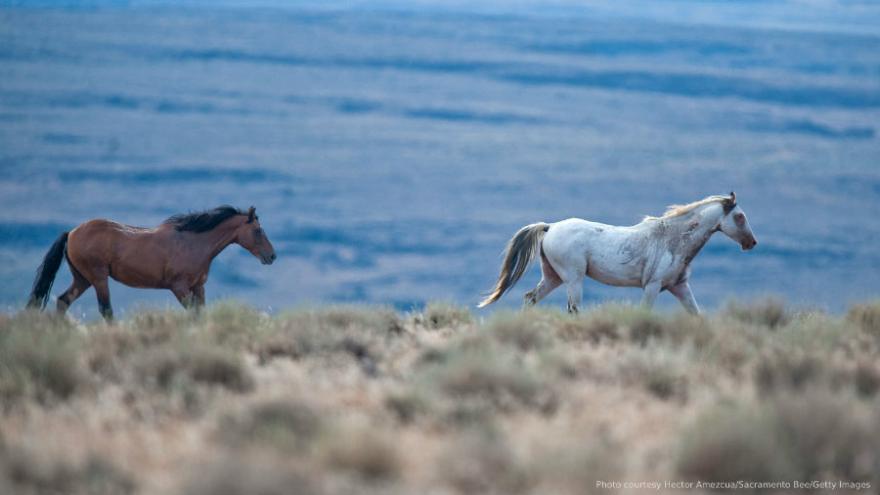 Modoc County, CA (KPIX) -- With the wild horse population in Modoc County growing far faster than the land can handle, federal officials have commenced a roundup that will send some animals off to an uncertain future.

Ranchers say the growing population is interfering with the area’s balance of life, but some activists argue the corralling is sure to send many of the older horses to slaughter.

With one helicopter and a small band of wranglers, the operation can collect as many as 65 wild horses in a single day.

“We have the best contractors in the country helping us,” said Laura Snell with UC Extension. “They know how to get those horses in as safely as possible, how to get them sorted, and they really care about the horses.”

“We take seriously the responsibility to care for these horses. That’s one of the main reasons we feel an action is needed to reduce the total population,” said Ken Sandusky with the U.S. Forest Service.

And for the U.S. Forest Service, this is all about numbers. This land is supposed to have from 200 to 400 horses. The population is now close to 4,000 and is growing at about 20 percent per year.

“I can show you miles of this fence where horses have broken through,” said Sandusky.

Those horses are competing for food with biggest business in Modoc County: the cows.

And with warmer winters the land itself is changing, the invasive annual grasses replacing the native perennials provide very little nutrition.

“You can see where the horses have bitten up this Medusa Grass, realized it’s not good food, and spit it back out all over here,” said Sandusky.

The land in the region is supporting more animals, but has less food.

So what happens to the horses?

The youngest, probably about 700, will go to a BLM holding facility where they will be put up for adoption.

But another 300 horses — roughly age ten and older — will be held in the new Devil’s Garden Corral until their fate is decided.

Keeping an eye on what is unfolding in Modoc County, a handful of wild horse advocates have argued against this action. Many are concerned at how many horses could be sold into slaughter.

“The numbers are high and something has to be done about it, but slaughter is not an option,” said Steve Page with the American Wild Horse Campaign. “They could be doing more active birth control. They could be removing smaller numbers where they are more likely to get adopted out.”

The police presence is a reminder that there are a lot of strong opinions on how the horse removal is being handled and whether it could have been prevented. But the feeling out here isn’t so much conflict, rather more of a solemn resignation that this chapter has arrived.

“I’m also a local person who was raised on an Indian Reservation, and so I relate to the wild horses,” said wild horse adoption volunteer Rosemary Nelson. “I feel like a wild Indian who’s been tamed somewhat.”

Nelson said she has slowly changed her mind.

“I’ve come more to the center and realized that slaughter may have to be part of the solution,” explained Nelson.

So while the gathering of the wild horses will continue for several weeks, the debate surrounding it will not end.

“There’s a right and a wrong way to manage these horses and this is the wrong way,” said Page.

In the meantime, the fate of the older horses remains up in the air.