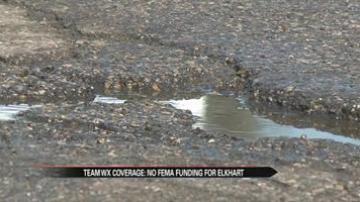 Elkhart County Commissioner Frank Lucchese said without the government aid, some roads in need of repair won’t get worked on until next year.

“We blew through our 2014 budget in the first couple months of the year,” said Lucchese.

They used up the money plowing roads, buying salt, and paying employees overtime.

“I’ve been a commissioner eight years and this is the first time we requested any money from FEMA,” said Lucchese.

He said now some roads will just be patched instead of repaved.