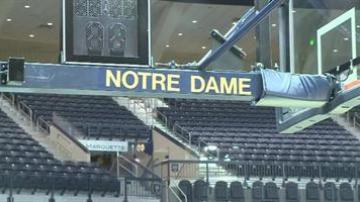 ABC 57 was there to talk with the head coach Muffet McGraw and players.

This year the team joins the ACC after 18 years in the Big East Conference.

Coach McGraw says her team looks to make a trip back to the Final Four for the fourth year in a row.

"I think this group of seniors knows this could make history. They could be the first group to go four years to the Final Four and I think it's something, a little bit of a chip on their shoulder that they have something to prove," said Coach McGraw.

Last year the team went 35-2 and made their third consecutive trip to the Final Four.

The team's first game is set for October 30th at home.