Fire Chief: rollover repairs could take a while; back-up truck ready to use 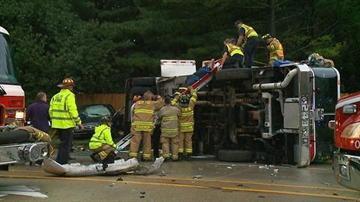 CLAY TWP.,Ind – Less than 24 hours after a rollover accident, Engine 234 sat on all four wheels inside the gated storage area behind the Clay Township Fire Station 2. Fire Chief John Vance stood nearby talking to firefighters about how he found it when he arrived at the scene of the accident Wednesday evening.

Vance says he was near tears, wrought with grief, when he first pulled up. “[When] you see a vehicle like this on its side, usually death or serious injury is involved,” said Vance.

No one died Wednesday night. Amazingly everyone has been able to walk away from the accident relatively unscathed.

He was responding to a car accident at Juniper and Auten Road. The two emergency vehicles collided, the police cruiser striking the fire truck in the real passenger wheel.

The engine lost control, spun and rolled into a passenger vehicle, destroying the car’s back and. Nothing was left of the police cruiser’s front end but twisted metal torn to shreds.

After the injured were taken away, the fire truck was put back on its wheels and taken to Station 2. Thursday, firefighters from the department visited the wreck to look over the damage for themselves.

According to Vance, there are three big reasons no one perished as a result of the accident.

First, Vance credits a culture of safety that prompted the firemen to wear their seatbelts. “We wear seatbelts all the time. Just isn’t law; just isn’t policy; it’s part of the culture,” said Vance.

Secondly, Vance credits a new clean cabs initiative the department has recently undertaken. “We used to have a lot of loose tools and other equipment in the cabs as we were responding. We started securing that equipment. We started putting it in cabinets, really stowing it better,” said Vance.

Finally, Vance credits the driver of the engine. With 12 years experience behind the wheel of a fire truck, and with annual emergency driving classes under his belt, Vance says he was integral to keeping the three-man crew alive. “Things could have been a lot worse, and I think thanks to all of those measures, they weren’t,” said Vance.

Vance says, the department is working with their insurance company to get Engine 234 fixed and back into service as quickly as possible. In the meantime, a back-up engine is already being used.

Fixing the fire truck could take a while, according to Vance. The engine was equipped with several sophisticated and sensitive pieces of equipment that will need to be tested after the truck’s damage is repaired.

As for the firefighters involved in the crash, only one of them needed to be taken to the hospital; he is already been released and is recovering. Vance does not foresee any drop off in the department’s ability to service calls.