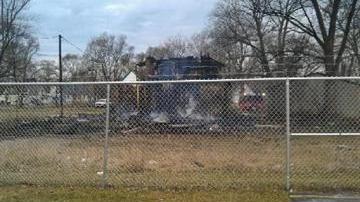 Fire firefighters from Saint Joseph and Benton Township arrived to the scene around 5:30 Wednesday morning on Oden Street.

According to firefighters on scene, the fire started in the basement and caused half of the second story of the building to collapse. Wind and heat in the building made it difficult to put out the blaze.

We're told the place belongs to the city and it is vacant. The building was undergoing asbestos abatement and the city was planning on tearing it down at the end of the month.

Noinjuries were reported in the fire.