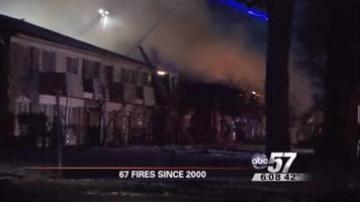 On Friday morning, a fire wiped out 33 units at The Park Jefferson Apartment Complex.

We filed a formal request and discovered the South Bend Fire Department has been called out to the complex 67 times since the year 2000.

Within the last year, we've covered at least three fires at the complex.

The property manager there told ABC 57 News many of those fires were due to human error, started accidentally by tenants.