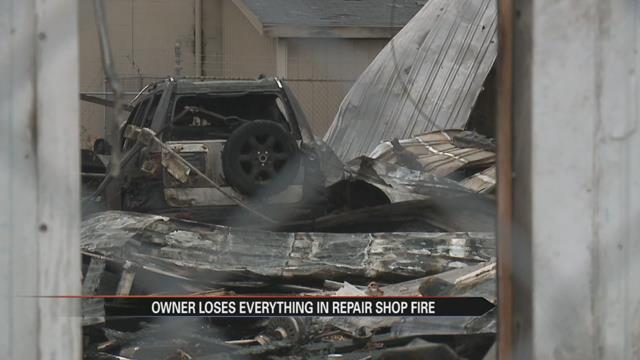 On Friday, the owner of Topline Auto Repair in Elkhart looked back on the ruins left behind of the business he and his son worked so hard to build.

It was an emotional day for Joe McGinnis but despite the scorched mess he is already making plans for the future.

It was a dream 41 years in the making.

“I started as a child or as a teenager just working on go carts and mini bikes and just progressed from there,” says McGinnis.

McGinnis was just about to celebrate an anniversary at his business on Oakwood Avenue.

A destructive fire cut that celebration short. As of Friday afternoon the Elkhart Fire Department is still investigating the cause.

“My son has been with me every since we opened this. A lot of memories getting started, we put this together ourselves,” says McGinnis.

“Eight, nine, ten, and a Harley Davidson sitting back there, so there were 10 vehicles in there,” says McGinnis as he counts the number of cars destroyed by the flames.

“Customers cars a couple of them probably three of them brand new customers. I am very sorry about their loss,” says McGinnis.

Now McGinnis is dealing with his insurance company to replace those ruined vehicles. Topline Auto is his only source of income so he started looking for a new building just hours after the fire was put out.

“I’ve been out looking a little bit today and with everything that has happened it is just kind of really hard to do right now but I will reopen, this is not the last Elkhart has seen of me,” says McGinnis.

The only person near the building early Friday morning when the fire started was the security guard who lived next door. She was not hurt but is still missing one of her pets; a cat that she is hoping will show up soon.