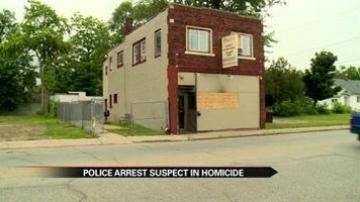 SOUTH BEND, Ind. -- A fire started early Monday morning at a building where a man was shot and killed Saturday night.

"The call came in as fire and smoke showing. They made entry into the front door and extinguished the fire. Didn't take that long. It was contained to one room," said Captain Gerard Ellis, Public Information Officer of the South Bend Fire Department.

Ellis says it helped that a fire station is directly across the street.

"They say fire doubles in size every minute so obviously the quicker we can get on scene," said Ellis.

The flames were contained to the main room on the first floor.

There was minor damage to the structure.

Firefighters reported the fire was incendiary.

"It could be something as simple as a lighted cigarette butt or an incendiary Maltov cocktail. Kind of covers a broad range of items," said Ellis.

No arrests have been made in the fire.

Metro Homicide is investigating a deadly shooting that happened outside that same location Saturday night.

Police said 55-year-old Michael Gillam was shot and died after an argument.

55-year-old Michael Taylor was arrested on a preliminary charge of murder.

"The shooting is still under investigation with the police department and until they can release any more details, we have nothing to add onto that," said Ellis.

Investigators have not said if the fire and the shooting are related.

If you have any information you're asked to contact Metro Homicide.