Fired city employee looks back at career, maintains she did nothing wrong 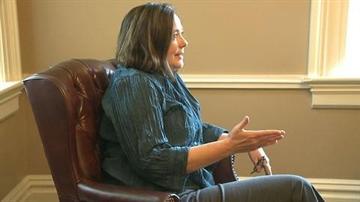 SOUTH BEND, Ind. – A long career in the communications department at the South Bend Police Department came to an end last week, when Karen DePaepe was fired by the city.

According to heavily redacted documents provided by the city’s human resource department, Depaepe was fired for Conduct Unbecoming a City Employee.

There was no explanation of what that mean, and the “details and circumstances” section were blacked out.

DePaepe sat down with ABC 57 and talked about how she got her start in the dispatch center, what it was like working in the department over the course of her 25 year career, and how it all ended.

Depaepe was first hired as a dispatcher around the time she was turning 28 years old.

She had children to feed and needed a job with benefits and a retirement plan.

Her brother suggested she apply for a dispatcher position at the police station. “When my brother first told me [he said], ‘oh sis it’s an easy job, all you do is answer phones and put calls out’,” said DePaepe.

“After training I found it to be the most stressful thing I have ever done in my life, and I kept thinking; well I can’t resign from this job, it wouldn’t look good on my resume, so I better stay a while,” said DePaepe.

DePaepe turned the job into a 25 year career. After a few years of dispatching, DePaepe put in for a transfer to the departments data center; she had gone back to college by then and was studying computers.

A short time later, DePaepe was asked to apply for an open supervisor position in the dispatch center.

According to DePaepe she was not really interested in it, because she had never supervised anyone before; but the lieutenant in charge insisted.

She was given the job, and excelled. A few years after that, she was asked to apply for the Director of Communications position, this time by the deputy chief overseeing her department.

Again, she was reluctant, but eventually applied, was interviewed and earned the job.

According to DePaepe, there had been talk of turning the communications department into a fully civilian operation.

Around that time, DePaepe was told, they hired a man for the position and paid him a $45,000 salary. When she was hired as director several years later, she received $32,000.

But DePaepe did rock the boat. “I had no problem with that, because I had never been a Director of Communications so I felt that I had to more than prove myself,” said DePaepe.

For 14 years, DePaepe went on to prove herself worthy of the title of Director of Communications.

It wasn’t always easy though, especially on the home front.

DePaepe was fiercely dedicated to her job, and she and her daughter struggled with that.

Her daughter eventually grew to understand the importance of her mother’s job, and the love she had for helping people; the resentment faded and was replaced with pride.

Last week, DePaepe’s long career in the communications department came to an end amidst controversy over telephone recordings she found and reported.

There are times she wishes she had never found the recordings.

There are times she wishes she had simply ignored them.

But in the end, she says she did the right thing; reported them to her superiors, following the chain of command.

Now, instead of retiring and receiving her pension in three years; she will have to wait 7 more and get less because of it.

It is because of the city’s policy of pensions, called the rule of 85.

In order to begin collecting the pension, the employee’s age and years of service have to add up to 85.

The amount is based on the five highest paying years of service.

While the amount of her pension has been effected by her termination, DePaepe says leaving her employees and friends behind is just as painful. “There were technology changes coming about, and I wanted to help my staff to get to the point where we could get 911 to the next level,” said DePaepe.

Now that will not happen, at least not under her watch.
Share this article: