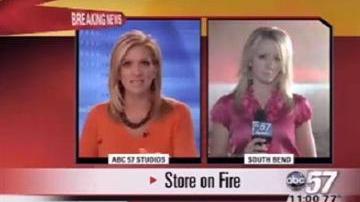 Crews have drawn back, fighting only the exterior of a commercial building fire on Miami Street in South Bend.

The Chief told ABC 57 it is just too dangerous to be inside, since the roof could collapse.

At this point, no serious injuries have been reported but a firefighter was transported to South Bend Memorial Hospital for dehydration.

The fire department blew the horns twice, within the first hour of the fire, to pull crews out of the building. The Marshall said it could be hours before anyone goes back inside.

“It’s just too dangerous and not worth the risk, since the building is vacant,” Marshall Rodriguez said.

Crowds gathered to watch crews fight the blaze, as plumes of smoke billowed out, burning their noses and throats.

A 15-year-old girl told ABC 57 she was driving down Indiana Ave. with her mom when she saw flames in one of the back windows.

“I was like Mom! We have to turn around! There’s a fire! So we did and I called the fire department,” she said.

The Marshall is not sure how the fire started, but said it did appear the fire orginiated in the roof rafters.