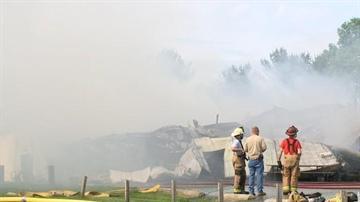 "It breaks my heart, but everybody is O.K."

Marel Riley fought back tears as she tried to figure out what to do next. Her dad started Southern Michigan Rubber 23 years ago with a dream.

Today -- most of that dream was crushed. Sparks turned to flames when dust inside the building ignited. The fire grew so large, a portion of M-62 had to be shut down for several hours.

Dozens of firefighters worked to control the scene, but the rubber just kept smoking.

Riley said some of the building was saved, so they may be down momentarily, but they're not out.

"The back building was untouched where we do molding, and we're going to keep going. We're here."

The plant is located in a rural area, so there are no fire hydrants nearby. She said 25 employees were inside at the time, and did their best to contain the flames.

The fire, however, spread too quickly for them and emergency responders.

"We had a little bit of a water-supply problem," Riley said. "I can't even imagine how many tankers have been used. There's just been one tanker after another."