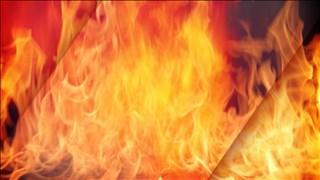 The fire happened in the 1200 block of Garfield Avenue.

Fire officials say the accidental fire began inside the wall on the east side of the home between the first and second floors.

Fire officials say smoke and flames were showing on the east side of the building when they arrived on scene.

Firefighters were able to put the fire out within 30 minutes but say about $12,000 worth of damage was done from the fire.

No injuries were reported and everyone was able to make it out of the home safely.