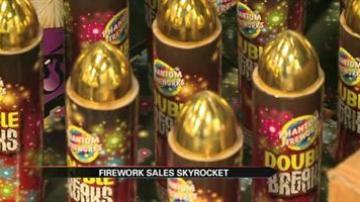 MISHAWAKA, Ind.-- Just four days after multiple tornadoes touched down in Michiana, firework stands are booming. Store managers said they saw a spark in sales after Monday because people were celebrating their power being restored.

Hannah Bland said, “We’ve heard a couple people say how they just got their power back on today and they are so excited and just ready to have some fun.”

The Bland sisters at Crazy Steve's Fireworks in Mishawaka said they gave deals to residents who were still without power on Friday.

Rachel Bland said, “We had a couple people come in and tell us that they still had power outages so that’s kind of affected how much they had to spend so we really tried to make deals with them and make sure they had a good July 4th.”

The Phantom Fireworks in South Bend also saw an influx of people come in to buy fireworks once their lights came back on.

Gavin Rach said, “I feel like they want to come out and celebrate a little bit more. Because of the power outage some people are coming in to get small stuff while others are getting together with their neighbors to put a show together.”

Several years ago there was a burn ban in South Bend because of a drought.

Rach said the rain that came with Monday's storms was a blessing in disguise.