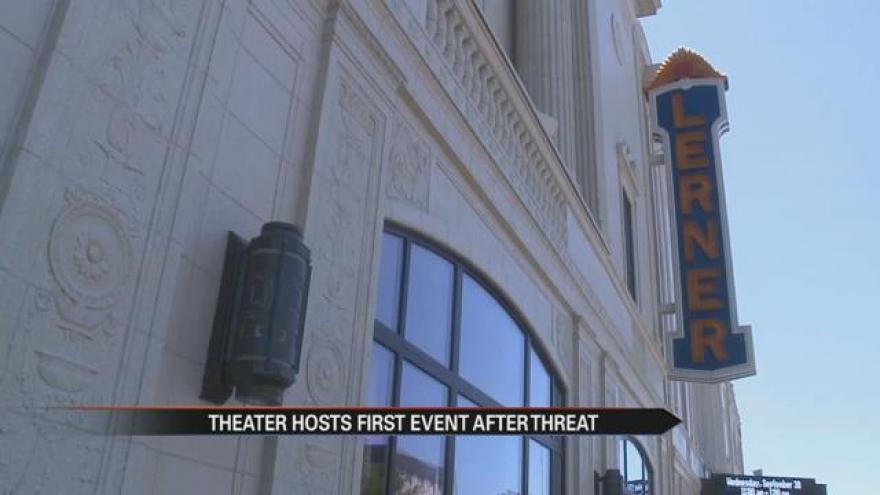 Law enforcement officers in Elkhart are working along with staff at the Lerner Theater to make sure upcoming events go off without a hitch. The increase in security comes after the theater received a threatening voice mail.

On Thursday the first event following that threat was held. Management says it was a success and nothing unusual happened.

They add that even before the threatening message was left they worked closely with Elkhart Police to make sure patrons are safe.

But now the selfish act of one has the entire staff here on what they call “airport mode.”

Hundreds of middle and high school students filled the Lerner Theater on Thursday.

“Whenever you have a group of kids and you know somebody makes threats we are here to make sure that the kids are taken care of – so there is that little added responsibility,” says Sergeant Chris Snyder with the Elkhart Police Department.

Sergeant Snyder says officers and the team at the Lerner have always worked to keep the thousands who visit the theater safe. But after a threatening voice mail was left for the theater on Monday there has been extra patrol from police and high alert from staff.

“In advance of this morning’s event it was really, be the great ambassadors for the space that you always are – but we are kind of on airport mode,” says David Smith, General Manager of the Lerner Theater.

The threatening voice mail said there would be a deadly attack there on September 12th. That day the Elkhart County Symphony is set to perform.

Smith says extra security on that day is a no brainer.

“Oh most definitely, yea, yea, of course,” exclaims Smith after being asked if there were additional security plans for the symphony event.

But he doesn’t want a threat to scare those who want to enjoy an outing.

“If you love your freedom to go where you want and to not be squashed by the crazies out there then just buy a ticket and come to the show just as a form of solidarity,” says Smith.

According to Smith ticket sales to the symphony are on pace.

He reiterated that the lines of communication between the theater and the police department have always been open and will stay that way.