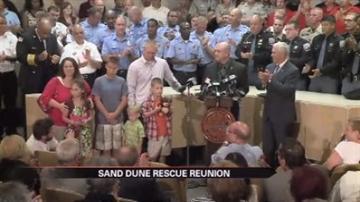 MICHIGAN CITY, Ind. -- The first responders who rescued a 6-year-old boy were honored by Michigan City's mayor and Indiana's governor Wednesday at Michigan City's City Hall. Nathan Woessner fell 11 feet into a hole on Mount Baldy in July and was buried alive for four hours.

Wednesday, Nathan not only met his rescuers, but met Governor Mike Pence.

"Let me say from my heart, on behalf of all the people of our state, every one of you is a Hoosier hero," said Governor Pence.

Pence went on to thank emergency crews for July's rescue and their commitment to public service every single day.

Without their heroic efforts, the Woessner family could have faced a tragedy instead of triumph.

A miracle memorialized with a plaque with the names of all 140 firefighters, police and park rangers who assisted in the rescue.

They also received thanks from Michigan City's Mayor Ron Meer, the governor and Nathan Woessner.

The governor spoke of Nathan's strength.

Nathan was in the hospital for several weeks but recovered just in time to return to school for first grade.

Other than a few scars, Nathan is doing well.