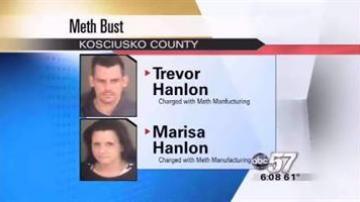 Police arrested Trevor Hanlon, and his wife Marisa on Sunday night at their Warsaw home.

Officers told us that they got an anonymous tip.

Inside, deputies said they found meth and a one-pot lab.

They all face meth making charges.

Officers said a meth lab exploded on Friday afternoon in a car in Larwill.

Sizemore was taken to the hospital for burns, but took off!

Police eventually found him at his mom's house.