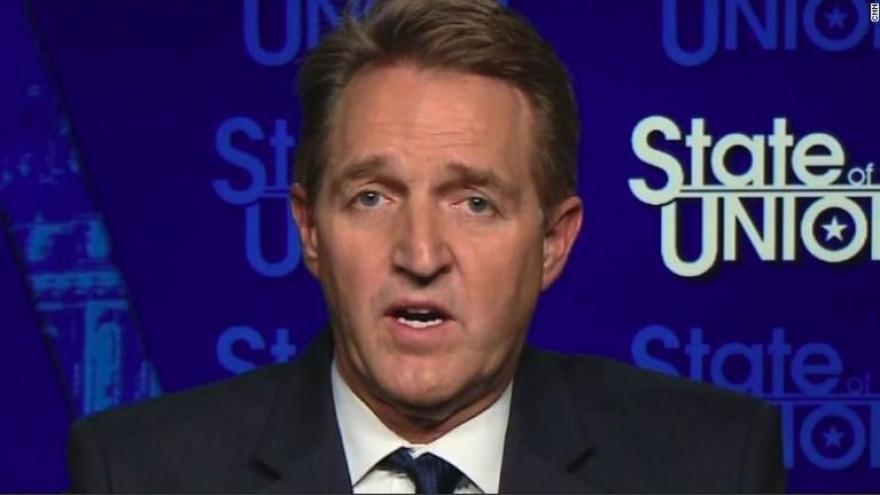 "We can't in Congress accept that," Flake said on CNN's "State of the Union," adding, "I would expect to see considerable pushback in the next couple of days."

Trump over the weekend tweeted that the Mueller probe into Russian meddling in the 2016 election never should have begun, and on Sunday morning, continued to rail against the ongoing investigation. Trump attorney John Dowd said in a statement on Saturday that he hopes Deputy Attorney General Rod Rosenstein, who appointed the special counsel, will end the investigation.

When asked if he really felt GOP leaders, like Senate Majority Leader Mitch McConnell and House Speaker Paul Ryan, would come to Mueller's defense, Flake said, "I hope so."

"I mean, talking to my colleagues all along it was, you know, once he goes after Mueller, then we'll take action," Flake said.

White House special counsel Ty Cobb emphasized in a statement Sunday night, however, that Trump is not considering firing Mueller.

"In response to media speculation and related questions being posed to the administration, the White House yet again confirms that the President is not considering or discussing the firing of the special counsel, Robert Mueller," Cobb said.

South Carolina Republican Sen. Lindsey Graham, who has backed legislation to protect Mueller, said in a separate interview Sunday on "State of the Union" that if Trump tried to end Mueller's investigation would "be the beginning of the end of his presidency."

AshLee Strong, a spokeswoman for House Speaker Paul Ryan, issued a statement of support for Mueller on Sunday afternoon when asked for a reaction to the President's comments.

"As the Speaker has always said, Mr. Mueller and his team should be able to do their job," Strong said.

When asked, Strong did not comment directly on whether Congress should advance legislation to protect Mueller.

Meanwhile, Senate Minority Leader Chuck Schumer said in a statement on Sunday that Trump "is floating trial balloons about deraiing the Mueller investigation."

"Our Republican colleagues, particularly the leadership, have an obligation to our country to stand up now and make it clear that firing Mueller is a red line for our democracy that cannot be crossed," Schumer's statement read.

Flake said he was "puzzled" by the White House's intense focus on former FBI deputy director Andrew McCabe and disagreed with Trump declaring McCabe's firing "a great day for democracy."

"I think it was a horrible day for democracy," Flake said.

Flake said a report from the inspector general of the Justice Department, which Attorney General Jeff Sessions cited in a statement on the firing, would come out in due time and that he expected the Senate Judiciary Committee would conduct oversight of the department.

Graham said in his interview that he would like the Senate Judiciary Committee, on which both Graham and Flake sit, to hold a hearing with Sessions and McCabe on the issue.

"I think we owe it to the average American to have a hearing in the Judiciary Committee where Mr. Sessions, Attorney General Sessions, comes forward with whatever documentation he has about the firing, and give Mr. McCabe a chance to defend himself," Graham said.

Florida Republican Sen. Marco Rubio said in an interview Sunday on NBC's "Meet the Press" that he too did not like that McCabe was dismissed just over 24 hours ahead of the former FBI official's expected retirement and said appropriate action could have been taken after the inspector general's report comes out.

"I don't like the way it happened," Rubio said. "He should have been allowed to finish through the weekend."