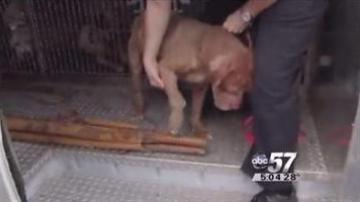 FLINT, Mich. -- In Flint police think a 14-year-old is behind a dog fighting ring.

Some of this video may be disturbing to watch. At least five dogs were rescued from a home on Flint’s North Side Tuesday.

Investigators say they were being used in the brutal sport. They say the garage was set up like an arena.

Police think the dogs fought in the center.

"Unfortunately this goes on all too often all over the county, but what's really disheartening is to find a 14-year-old involved,” said Genesee County Sheriff Robert Pickell.

No charges have been filed against the teen. The sheriff's department said he is currently suspended from school.

He has been kicked out of school at least 10 times this year.