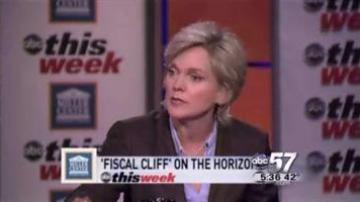 On ABC's ‘This Week’, she said the president's intervention helped save Michigan’s economy.

“Michigan had the toughest economy in the nation for the first decade because of the loss of automotive and manufacturing jobs,” said Granholm. “Our unemployment was at 14.5 percent.  It's now at 8.4 percent. The reason is because there was a decision made to intervene."

She said that's why the state is now seeing a recovery.