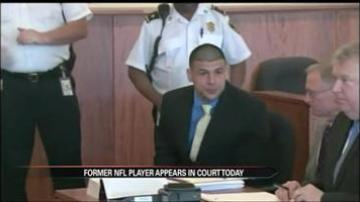 Former NFL player Aaron Hernandez was back in court Monday.

Hernandez is accused of assaulting a fellow inmate and threatening a guard.

His attorneys will also ask the judge to throw out one of his murder charges.

They say there is no forensic evidence that says Hernandez killed Odin Lloyd last year.

Hernandez was also charged with a double murder in 2012.

He has pleaded not guilty to all the murder charges against him.
Share this article: