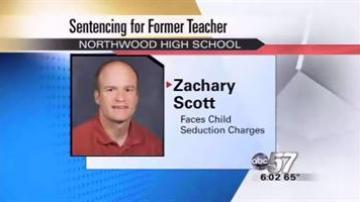 NAPPANEE, Ind. -- A former Northwood High School teacher that admitted to being sexually involved with a student will learn how long he'll have to sit behind bars.

Twenty-seven-year-old Zachary Scott will be sentenced on Monday. Scott told detectives back in April that he was sexually involved with a 16-year-old student.

Administrators found emails between Scott and the teen. When confronted, both admitted they were involved.

Scott was a math teacher at Northwood. He also helped coach the boys basketball and baseball teams.

Scott faces up to three years in jail.