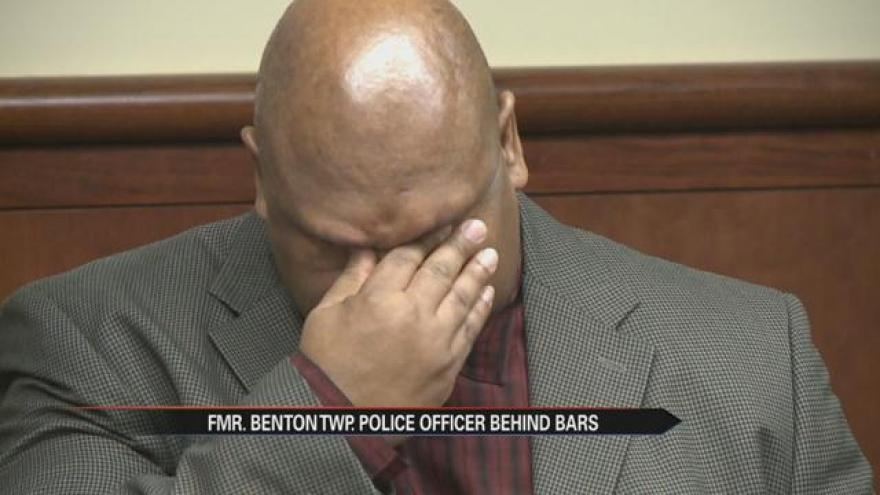 The former Benton Township Police Officer who struck and killed a pedestrian while on the way to a domestic violence call was sentenced on Friday.

Eugene Anderson was traveling over 60 miles per hour in a 35 mph zone without his lights or sirens activated.

Kimberly Bedford was crossing Pipestone Avenue when she was struck by Anderson's patrol car.

Because Anderson did not have his lights and siren activated, he was charged with moving violation causing death.

Anderson was found guilty on February 4 after a three day jury trial.

In court Friday, Anderson was hoping for a mistrial, but the judge immediately ruled out that possibility.

"You're not apologetic about anything! You think that you are above the law, and I'm telling you right now, as a police officer, you're not above the law," Judge Dennis Wiley told Anderson in court.

After he said that to Anderson, Judge Wiley handed down the sentence.

"You're also to serve 60 days in jail. Failure to pay your fines or costs will result in a 150 day jail sentence," said Wiley.

"If you were in such a big hurry, to get to wherever it was you thought you had to go, you should've put your lights on and complied with the law," said Judge Wiley.

Prosecutor Michael Sepic played ABC57's interview with Anderson to show the judge Anderson said he had no regrets.

The judge said the trial made it clear the suspect in the domestic violence case was no longer at the scene when Anderson was sent to it.

"It was not a priority call. It was made known to everyone," said Judge Wiley.

Even though it was later determined Bedford's BAC was higher than the limit for driving, Judge Wiley said the jury's verdict made sense.

"As you said, a human life is precious. That woman did not deserve to die. Except for your excessive speed, your being in a big hurry, and, as you've just indicated, you have no regrets for not complying with the law and the excuse that everybody else does it doesn't cut it with me," said Judge Wiley.
After court, Anderson was taken to the Berrien County Jail to serve his sentence.

Anderson's attorney said he plans to file an appeal because he thinks wording used in the jury instruction was unfair to his client.

Judge Wiley said that argument was essentially invalid because Anderson's attorney had multiple chances to change the wording before it went to the jury - and he failed to do so.

Anderson's family was at the sentencing and seemed very upset with the judge's decision. They said they are not ready to speak with the media.