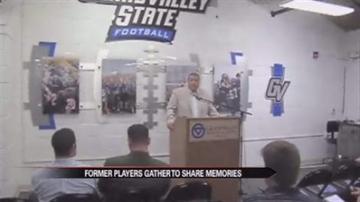 ALLENDALE, Mich. -- Former football players came together to share memories of their teammate who was found dead Tuesday.

Cullen Finnerty played football at Grand Valley State. Wednesday former players say their team had a bond unlike anything else.

They described him as always laughing and full of life. Now they are struggling to come to terms with the fact that he is gone.

An autopsy confirmed he died of an enlarged heart.