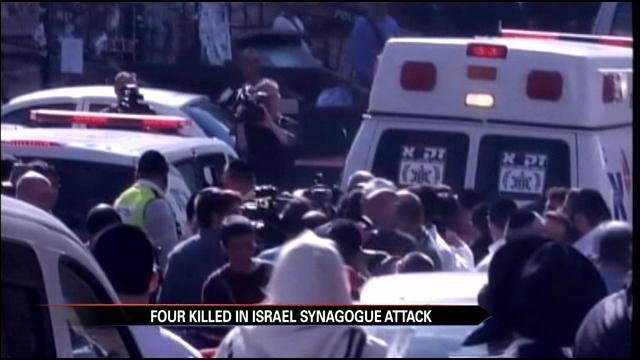 A synagogue in Jerusalem was under attack by Palestinian gunmen who killed five, including three Americans.

Four of the victims were rabbis and were laid to rest, just hours after their deaths according to Jewish tradition and thousands came to mourn their loss.

The other fatality was a police officer.

Two Palestinian men were armed with knives, axes, and guns and began to storm te stheagogue, killing the five and injuring six others who attended morning prayers.

These six people were injured from direct axe blows to the head.

“The police which arrived at the scene shot and killed the terrorists,” says Israeli Police spokesman Micky Rosenfeld.

This was the first time in the longstanding Israeli-Palestinian conflict that worshippers inside a synagogue were targeted.

The attack took place in an orthodox Jewish neighborhood that has a large population of English-speaking immigrants.

One of the Americans is the son of a prominent Boston rabbi and the grandson of the founder of modern Orthodox Judaism.

Tensions in Jerusalem are at their highest point in years, centered around the Al Aqsa mosque, on a site that is one of the holiest places to both Jews and Muslims.

“Tragically, this is not the first loss of life that we have seen in recent months. Too many Israelis have died, and too many Palestinians have died,” says President Obama.

Israel's prime minister issued a statement Tuesday saying the Jerusalem homes of the two attackers would be demolished as punishment.