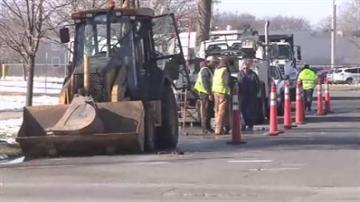 SOUTH BEND, Ind. --Fluctuating temperatures this week could create a bad combination for water pipes. There was a water main break Wednesday in South Bend near the corner of Lombardy Drive and Ford Street.

Crews had to shut off water to a Navarre Intermediate Center, Fellowship Baptist Church and the St. Joseph County Public Library Western Avenue branch to fix the break.

Street Department crews arrived around 10 a.m., but weren’t allowed to start working on the pipe break until school got out around 3 p.m. because Bob Krol, the Director of Distribution for South Bend Water Works said the school couldn't operate without water.

"Crews arrived on the site pinpointed the leak and at this time we have to shut off Navarre School,” said Krol.

Krol says they couldn't do that until after school let out, so all morning and afternoon the water kept on coming.

"We will have to close the street to make repairs,” said Krol. “A normal repair for us start to finish is anywhere from 6 to 8 hours."

Although the mild weather has been easy on Michiana pipes recently, Krol says the warm temps Wednesday may have played a role.

"That's when we usually get the broken water mains driven by that,” said Krol.

He said if the temperature consistently drops below 32 degrees, then the issue comes back up.

"That's where there's an issue no question,” said Krol. “Because then the frost line could potentially start going down once we get the extreme cold again."

The change in temps could cause potential problems for homeowners as well.

“People who have empty houses or houses where they've had minimal heat in and maybe didn’t turn off the water now they are going to have the water pipes thaw out,” said Ron Niezgodski, partner Niezgodski Plumbing.

Niezgodski says disconnect your hose from your house if you haven't already because the water could freeze once those cold temps roll in next week and cause major damage to your pipes.

As for the city water pipe that burst, the problem was fixed around 5 p.m. and the water was was turned back on for local businesses and homes in a 3 to 4 block radius around the Lombardy Ave. and Ford Street intersection.