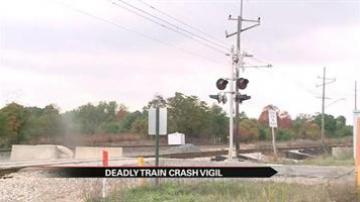 ST. JOSEPH COUNTY, Ind. -- It has been one year since 22-year-old Ryan Voreis was killed by a South Shore train while crossing a pair of railroad tracks in St. Joseph County at Pine Road and Ardemore Trail. Friends and family are holding a vigil for Ryan.

Family members say Ryan was a hard worker, kind and always ready to help others.

Family and friends shave made it a top priority to make the crossing where Ryan died safer so no one else is killed.

"Going 22 years with him and then all of a sudden just have him not here anymore just makes a huge difference, makes a huge impact on our lives," said Josh Voreis, Ryan's brother.

One year ago his brother was killed on the tracks.

"The freight train was headed this way and then the lights were on for both tracks because there was a South Shore train coming this way. And he didn't know which one was coming so he just snuck up in between and that's when it all happened," said Josh.

Because of the force of the impact, Ryan's friends and family are still finding pieces of his truck along the track.

"Our whole purpose was to get crossing guards installed and we've done that, we've exceeded that goal," said Emily Bragg, Ryan's friend.

Ryan's friends and family say if the crossing guards were installed one year ago-Ryan would still be here today.

They gathered Monday night at the tracks to celebrate his life and to remember the lesson learned by his death.

"Tonight we're going to be here at 6 o' clock. It's just going to be like a little memorial, a little get together to celebrate Ryan's life," said Josh.

"We hope to see more of a turnout than last year, even if it's random people to come show their support," said Bragg.

INDOT says South Shore is in the design process for the crossing guards, but they are making this project a top priority in order to make the tracks safer for drivers.

"When you consider it takes anywhere from one to five years for a road project to be planned and assessed and designed and put into construction, we're really moving this project along as quickly as we can," said Matt Deitchley, INDOT Spokesman.