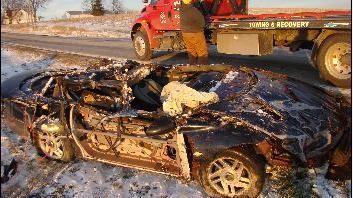 17-year-old Dylan Stimeling was airlifted from the scene to Parkview Medical Center after he wrecked his Camero trying to pass another car.

I talked to his girlfriend Sunday on the phone and she said there has been no change in Dylan's condition all week. He hasn't woken up yet.

The accident happened on State Road 19.

Officers say Dylan was driving too fast trying to pass another car when he lost control and flipped.