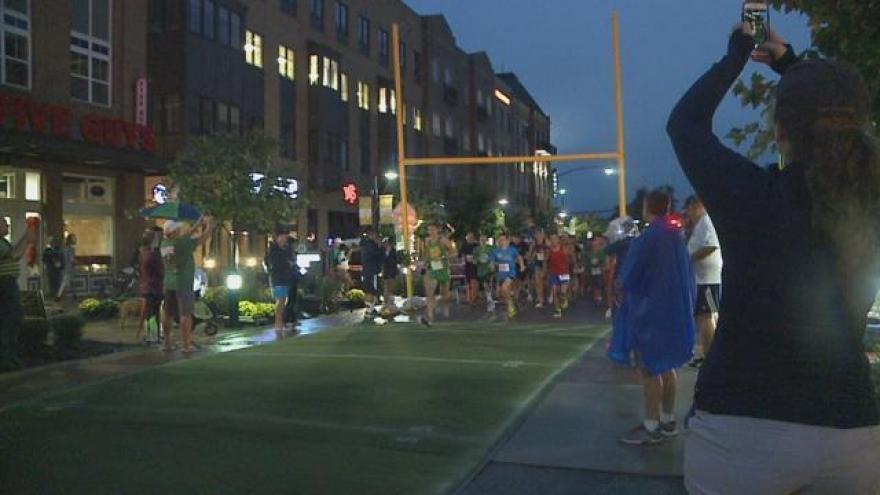 The 2015 Game Day Chase 5K/10K to benefit the Kelly Cares Foundation kicked off at 7 Saturday morning.

More than 800 runners gathered in Eddy Street Commons, where the run started and finished.

The annual race raises money for the Kelly Cares Foundation, which in turn goes to to benefit local organizations.

The money raised from Saturday's race goes to support research with the Harper Cancer Research Institute, according to Sharon Stack with the institute.

"We’re really grateful to have their partnership because it enables us to turn great research ideas into a reality. I’d like people to know that research cures cancer,” Stack said.

Stack said the institute is working on a project with the Kelly Cares Foundation to improve mammography, specifically for women with dense breast tissue. That means combining the power of nanotechnology and early detection to find cancer earlier, making the chances for a positive outcome greater.

The foundation started in 2007 as a way to give back to the community. Prior to the start of the foundation, Brian Kelly's wife, Paqui was diagnosed with cancer. After undergoing chemotherapy and radiation, she beat the cancer; however, got cancer again later on.

The foundation puts on various events, like the Game Day Chase to help raise money for breast cancer awareness and prevention.

“We’re trying to be like the first-responders, we did this family foundation with the idea of helping as many people as we could and you know when you do the mission statement it really tails right into what you’re going to do," said Co-Founder Paqui Kelly.