Gator shows up at club 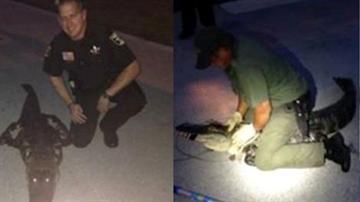 PALM CITY, Fla. (WPTV) -- Deputies were called when an unwelcome guest showed up in Palm City.

It appeared at the Monarch Club in Palm City Thursday, according to the Martin County Sheriff's Office.

Deputy Brian Merrifield said it was trying to hide in bushes when he arrived. With the help of a trapper they were able to capture the reptile.

Its next stop is a local alligator farm, according to the sheriff's office.