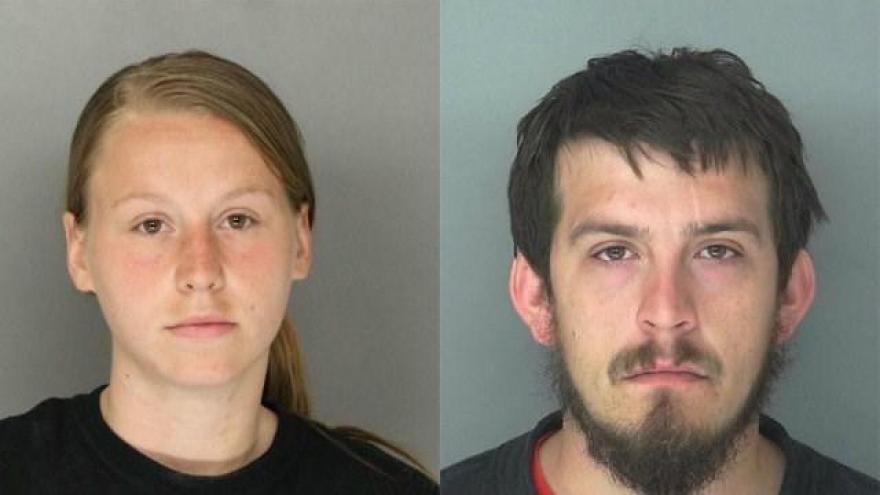 (CNN) -- A Georgia couple who rode with a Confederate flag-waving group that made armed threats against African-Americans at a child's birthday party were sentenced to prison Monday.

Jose "Joe" Torres, was sentenced to 20 years, with 13 years in prison, after a jury convicted him on three counts of aggravated assault, one count of making terroristic threats and one count of violating of Georgia's Street Gang Terrorism and Prevention Act.

Kayla Norton was sentenced to 15 years, with six years in prison. She was convicted on one count of making terroristic threats and one count of violation of the Street Gang Act.

"Many people tried to make the case about simply flying the Confederate Battle Flag," Douglas County District Attorney Brian Fortner said in a statement. "This case was about a group of people riding around our community, drinking alcohol, harassing and intimidating our citizens because of the color of their skin."

On July 25, 2015, Torres and Norton, joined about a dozen other people in a convoy of pickup trucks waving large Confederate flags as they drove around Douglas County, a suburban Atlanta community. Most of them belonged to a group called "Respect the Flag."

"The convoy of trucks passed by the victim's residence where the victims were grilling hot dogs and hamburgers while hosting a child's birthday party featuring a bouncy castle, snow-cone machines, and a DJ," the district attorney's office posted on its official Facebook page.

The party-goers said the people in the trucks yelled racial slurs as they passed, the statement said.

The drivers parked the trucks near the house, prosecutors said. Torres was part of a smaller group that "threatened to kill the party goers while repeatedly using derogatory racial slurs against them," said the statement.

"Torres, who had retrieved a shotgun from his vehicle, pointed his shotgun at the group of African American party-goers and stated he was going to kill them while his co-defendants stated that 'the little ones can get one too,' referring to the young children at the party," the statement said.

Norton was accused of making similar threats. The victims said some member of Torres' group was armed with a knife and a tire tool.

According to the district attorney's statement, Torres testified he carried the shotgun because he feared for his friends' safety. The Atlanta Journal-Constitution reported members of "Respect the Flag" said people at the party had thrown objects at them.

CNN has tried to reach the two defendants' lawyers for comment.

After the arrests, investigators looked through the defendants' Facebook accounts, the statement said.

"Law enforcement was able to locate numerous posts and messages indicating that members of the group were white supremacists who discussed attending KKK rallies, joining Skinheads Nation, and making numerous derogatory remarks about African Americans as a whole," the DA's statement said.

Video of Monday's sentencing shot by WSB-TV, a CNN affiliate, showed both Torres and Norton breaking down in court as Judge William McClain handed down the sentence.

Hyesha Bryant, one of the people at the party, testified at the hearing and told Norton, "What you said affected my life. It affected my children's lives."

But Bryant ended up telling Norton that "I forgive you, I forgive all of you."

A jury convicted Torres and Norton on February 6. They are both banished from Douglas County when they're released from prison.

Fifteen members of the Respect the Flag group were originally indicted. The disposition of all their cases is unknown, but the district attorney said some of them pleaded guilty to similar charges and received shorter sentences.