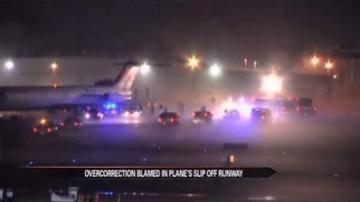 SAVANNAH, Ga. -- It was a scary situation for some Georgia travelers Tuesday night when their plane was landing.

Their Delta flight was trying to land at the Savannah Airport just before seven.

That is when the plane slid off the runway and ended up in the grass.

Passengers onboard say it was obvious there were problems with the landing.

No one was hurt on that flight.

Airport officials say the pilot apparently over-corrected, forcing the plane off the runway.