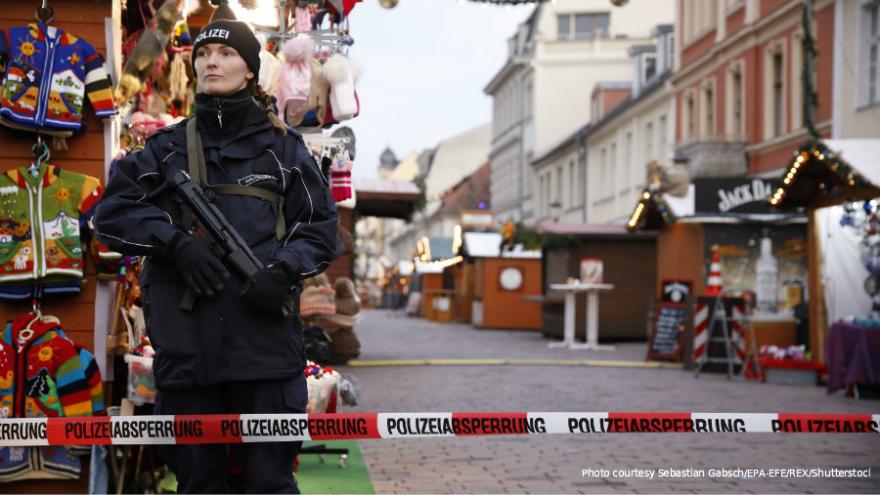 (CNN) -- A Christmas market on the outskirts of Berlin was evacuated Friday after authorities found what was thought to be an improvised explosive device (IED), police said on Twitter.

Later in the day, police said the cylindrical object contained nails, wires and batteries but no detonator.

Brandenburg police spokesman Thorsten Herbst said a suspicious package was delivered to a pharmacy in Potsdam. An employee opened the package, saw the device and called police, Herbst said.

He said police defused the device about three hours later. A follow-up police tweet clarified that no detonator was found.

Brandenburg police also said that the lockdown in the area near the Christmas market remains in place and that the investigation is still ongoing.

Last December, 12 people were killed and at least 48 were wounded when a tractor-trailer rammed into a crowd at a Christmas market filled with holiday shoppers in Berlin. The suspect, Anis Amri, was killed later in a shootout with police in Italy.

Police have been on alert for any similar plots. Following large-scale raids in four German cities on November 21 that resulted in the arrest of six Syrian nationals, a German intelligence officer initially told CNN that the arrests uncovered a possible terror plot on a Christmas market in Germany.

But the Syrians were released without charge after initial investigations found there wasn't "sufficient evidence of a terror plot," the Frankfurt prosecutor's office said.

There was also "no concrete evidence" the suspects belonged to the ISIS terror group, the office said.

There are, however, indications the men have had contacts with ISIS and investigations are ongoing, the office's Christian Hartwig said.

According to the initial account from police, the Syrian nationals had applied for asylum and were suspected of being ISIS members. An attack "had not been fully planned yet" according to the previous statement, but the suspects were believed to have been planning to carry out attacks with "weapons or bombs on a public target in Germany."

The German intelligence official, who spoke on condition of anonymity, further claimed the suspects had been carrying out target reconnaissance of the areas in which Christmas markets in Essen, Germany, would be held. They'd also surveilled buildings in Berlin, the official alleged.