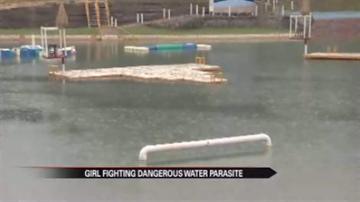 The mother of a 12-year-old girl that is fighting for her life from a deadly disease is speaking out.

Doctors say the girl got the rare meningitis from playing in a water park at an Arkansas lake.

It kills 99-percent of those who get it. Fifty cases have been reported in the United States over the last 10 years, including one just three years ago at the same lake.

Her mother says she just did not know it could happen.

"I've never even heard about it until Kali got it and then for me a mom, or a dad to be told that there's no cure for this amoeba is just heart wrenching," said Traci Hardig.

The girl is in critical condition.

Doctors say the brain eating parasite thrives in hot, stagnant fresh water. The only way to contract it is to ingest contaminated water through your nose.

It is suggested kids wear a nose plug or hold their nose underwater.