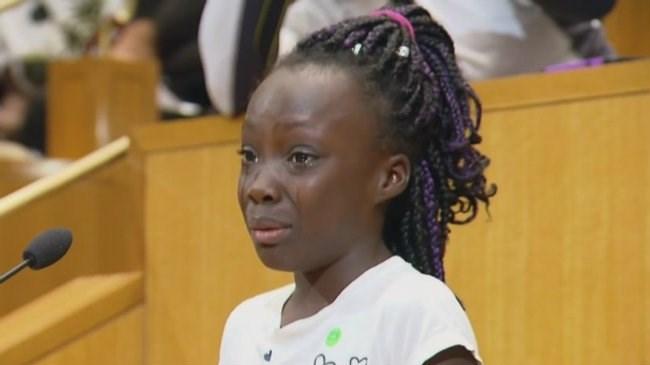 (CNN) -- A young girl climbed up a step ladder to stand at the podium before a tense Charlotte City Council meeting.

Petite in size, with braids in her hair and hearts on her t-shirt, Zianna Oliphant collected herself and delivered her message loud and clear.

"It's a shame that our fathers and mothers are killed and we can't see them anymore," she said with tears streaming down her face.

Zianna made her tearful statements during a highly-charged, emotional City Council meeting -- the first after protests over the police shooting of Keith Scott.

Charlotte residents packed City Hall, delivering blistering criticisms for how Mayor Jennifer Roberts and the city's police handled the death of Scott, an African-American man who was shot by an officer last week.

Furor over his death broke out into protests, which turned violent on two nights, in which one man died.

Scott died on September 20 as Charlotte-Mecklenburg Police Officers attempted to serve a warrant to another man at an apartment complex. As officers passed through the complex's parking lot, they encountered Scott, 43, who was exiting his car.

Police said he made a threatening move with a gun. The family said he was reading a book. The encounter ended with Scott lying face down in the parking lot, dead.

Protests broke out for several nights, before dying down over the weekend, in part due to heightened police presence as well as the decision to release body camera and dashboard camera footage.

Anger over city's handling of the case

After the turmoil of the previous week, peaceful protesters packed the council meeting holding signs supporting Scott and Black Lives Matter. They refused to stand for the Pledge of Allegiance and many called for the mayor and the police chief to step down, shouting and heckling the council.

Roberts had called for releasing the footage to the public before that occurred over the weekend. She had also vowed a transparent investigation of the Scott shooting and called for more community dialogue.

Residents voiced frustration over how black people are perceived by law enforcement. Among them was Zianna.

"I've been born and raised in Charlotte. And I never felt this way till now and I can't stand how we're treated," she said, wiping her cheeks on her short sleeves.