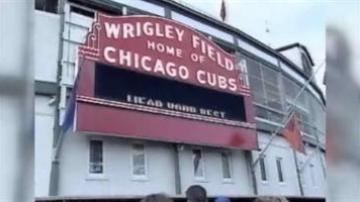 CHICAGO — Call it a different twist to the Curse of the Billy Goat for the Chicago Cubs.

Police say they are investigating the "intimidating package."

The goat is likely a reference to a legendary curse by the owner of a tavern, Billy "Billy Goat" Sianis.

During the 1945 World Series, Sianis tried to bring a goat into Wrigley Field. He was told he could not bring the goat in.

As legend has it, Sianis put a curse on the team saying they would never win again.

In the past, Cubs fans have tried to break the curse including establishing a charity to send goats around the world.

The Cubs are currently locked in negotiations with the city and the Wrigleyville neighborhood on renovation plans that includes the addition of video scoreboards and additional night games.