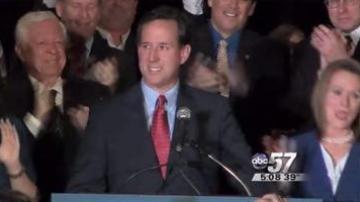 Santorum will attend the largest Lincoln Day Dinner in the state. He'll be in Novi around 5 Thursday evening.

Mitt Romney also visited the Mitten State this week, and probably not in the position he thought he'd be in.

New polls have him trailing behind Santorum, but new support from Michigan Gov. Rick Snyder could tilt the scales.

Snyder's editorial endorsement will run in a Detroit newspaper Thursday.

In Grand Rapids, Romney spent most of his time attacking President Obama, calling him among other things a “crony capitalist.”

He said the president bailed out the auto industry, because unions donated big bucks to him. He also went after the UAW president.

If Romney becomes the nominee, his anti-union and bailout mentality could hurt him in the general election.