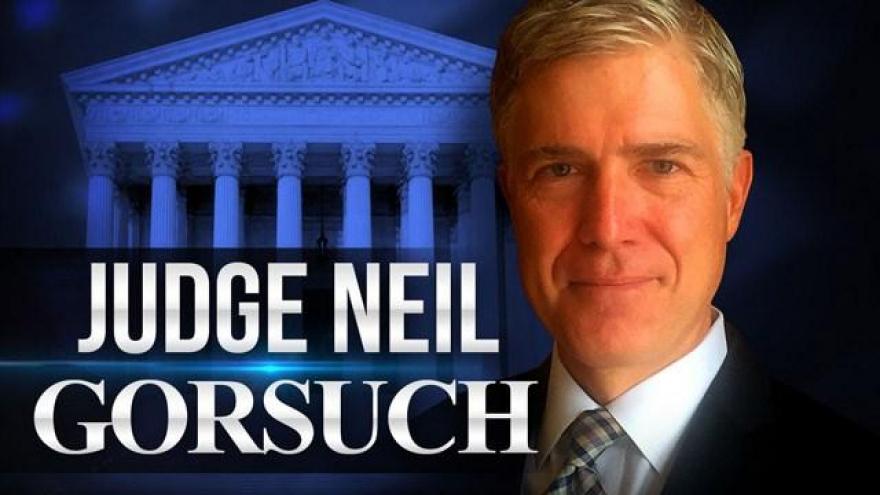 WASHINGTON (CNN) -- Supreme Court nominee Neil Gorsuch said Tuesday that he will "apply the law faithfully and fearlessly" when asked about whether a blanket religious test is consistent with the First Amendment, a reference to President Donald Trump's travel ban that prevents immigration from six majority Muslim countries.

"We have a Constitution and it does guarantee free exercise and it also guarantees equal protection of the laws and a whole lot else," Gorsuch said in reply to a question from Sen. Patrick Leahy during his second day of confirmation hearings. "The Supreme Court, in (Zubayadah), said that due process rights extend even to undocumented persons in this country. I will apply the law. I will apply the law faithfully and fearlessly."

"Anyone, any law is going to get a fair and square deal with me," he added.

Senators on the Judiciary Committee got their first chance to publicly ask Trump's nominee questions at the hearing, which is expected to last more than 10 hours.

Gorsuch spent a bulk of the time trying to prove his judicial independence and said the Trump administration never asked him to make promises to rule certain ways on certain decisions.

Asked specifically if he was asked to overrule Roe v. Wade, Gorsuch said no. He was further pressed on what he would have done if Trump had asked him to do so.

"Senator, I would have walked out the door," Gorsuch said, as the room fell silent. "That's not what judges do. They don't do it at that end of Pennsylvania Avenue and they shouldn't do it at this end either."

In another sign of independence, Gorsuch appeared to distance himself from the President's previous comments calling for the reinstatement of torture.

Asked by Leahy whether he thinks the President has the right to authorize torture if it violates law, Gorsuch ticked off a list of precedents that ban torture.

"We have a convention against torture and implementing legislation which bans torture," he said. "We have the Detainee Treatment Act, which we talked about earlier, which bans cruel, inhuman and degrading treatment. We also have an 8th amendment."

"Senator, no man is above the law," Gorsuch responded.

"I'd like to convey to you -- from the bottom of my heart -- is that I am a fair judge," Gorsuch said to Sen. Dianne Feinstein, the committee's top Democrat.

He listed off a number of cases in which he felt he ruled against "the big guy."

"I have participated in 2,700 opinions over 10 and a half years. And, if you want cases where I've ruled for the little guy as well as the big guy, there are plenty of them," he said.

He specifically listed ruling in favor of landowners in a lawsuit over nuclear waste at the Rocky Flats plant, which he said "vindicated the rights of people who had been subject to pollution by large companies in Colorado."

Critics have pointed to his decision in a case in which a trucker was fired for abandoning his broken-down trailer in freezing temperatures to seek safety.

The trucker, Alphonse Maddin, filed a complaint asserting that his firing violated a federal safety law. In a 2-1 decision the 10th US Circuit Court of Appeals ruled in Maddin's favor.

Gorsuch dissented. "A trucker was stranded on the side of the road, late at night, in cold weather, and his trailer brakes were stuck," Gorsuch wrote and noted that the company "fired him for disobeying orders and abandoning its trailer and goods."

"It might be fair to ask whether TransAm's decision was a wise or kind one," he wrote. "But it's not our job to answer questions like that. Our only task is to decide whether the decision was an illegal one."

'No such thing as a Republican judge or a Democratic judge'

Answering his first question of the day, Gorsuch said that he wouldn't have any trouble ruling against the President who nominated him.

While there was no mention of Trump in the question -- which came from the top Republican on the committee, Republican Sen. Chuck Grassley -- nor in Gorsuch's answer, it comes as Trump has made headlines twice in the past year for criticizing federal judges whose decisions he didn't like.

Grassley argued that "no one -- not even the President -- is above the law," and asked Gorsuch if it would be problematic for him to decide against the President.

"That's a softball, Mr. Chairman," Gorsuch responded. "I have no difficulty ruling against or for any party other than based on what the law and the facts in the particular case require."

Gorsuch tries not to 'tip his hand'

Gorsuch was also pressed on his view of previous cases. As is tradition with Supreme Court nominees, Gorsuch declined to give direct answers, saying it would be "inappropriate" to suggest how he would rule on already established precedents.

"I would be tipping my hand and suggesting to litigants that I have already made up my mind," he said.

His answers are consistent with what's called the "Ginsburg standard," a precedent set by Justice Ruth Bader Ginsburg in her 1993 confirmation to not comment on cases, so as not to hint at how she would rule in future cases.

Asked specifically about Roe v. Wade by Sen. Dianne Feinstein, the top Democrat on the committee, Gorsuch would not state his personal views on the topic or say whether he thought it was a "super-precedent," like she asked.

"It has been reaffirmed many times, I can say that," he said.

As senators tried to dig and prod to get his political views on the record, Gorsuch continuously dodged, citing a need to remain objective.

"A good judge doesn't give a wit about politics or the political implications of his or her decision," he said.

Gorsuch was slightly more open to talking about issues of religious liberty, something he has written extensively about. This is also consistent with the Ginsburg standard -- talking more freely about what topics the nominee has previously written about than things that might be before the court.

This story has been updated to reflect breaking news.