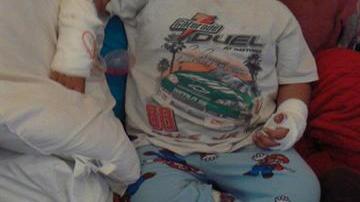 GOSHEN, Ind. - A Goshen boy is recovering well after he was attacked by the neighbor's dogs.

Ayden Detwiler, 8, told ABC 57 News that he was going next door to play on the trampoline when the two huskies attacked him.

Detwiler has several serious injuries including bites to his leg, arms, hands and ears. The top portion of his right ear was ripped off by one of the dogs.

Detwiler has undergone several procedures on his bites and his ear at a medical facility in Ft. Wayne. Physicians tried to reattach the upper portion of his ear but the process didn't work causing that part of his ear to die.

Plastic surgeons told Ayden that the upper part of his ear, which has now turned black, will eventually fall off. They are hoping that they can use a prosthetic in the future to make his ear look normal again.

The Detwiler family told ABC 57 News that the dogs were quarantined but have since been allowed to go back home.

Ayden's family hired an attorney to look into the situation and as a safety measure.

Click on the video player to see Ayden's recovery in his own words.