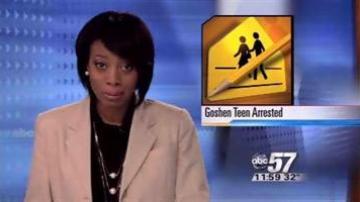 GOSHEN, Ind. -- Police arrested a student in Goshen on Friday for bringing a weapon to school.

A 15-year-old was taken into custody after being accused of bringing a knife to school on Thursday.

The teen is a student at Goshen High School.

We are told that the student has since been released to a parent.