Goshen woman says squatters broke in and stole her belongings 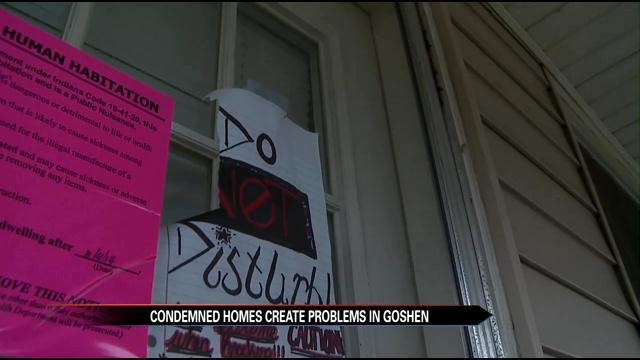 Goshen Police say they have witnessed people entering a house that has been condemned by the health department.

Monica Flores says she lived in the house before it was condemned.

Flores says she was arrested in late October for allegedly manufacturing meth.

“The police raided my house, tried to say that there was an active meth lab, which they did not find,” said Flores.

A few days later, on November 4, her home was condemned by the Goshen Health Department

“It was condemned until it could be tested through the health department,” said Flores.

She said the house was cleared.

“The health department says we are now allowed to go in, and I can have my belongings,” explained Flores.

Flores says when she went to get her things, she noticed some of it was already gone, and the place was trashed.

“A lot of my belongings came up missing.  People entered my house, the neighbors saw people leaving with my belongings,” Flores explained.

She says that is why there is a do not disturb sign.

“I figured I would leave the sign up there because people are entering my home, nobody should enter my home unless you have my permission," said Flores.

But at this point, Flores says she does not even want to enter her home.

“I've got most of my belongings packed up and I am going to go stay with my oldest daughter, got to get out of here," said Flores.

In Indiana, it is protocol for houses to be condemned if police believe meth was being made in the home because it seeps into the carpet, it coats cabinets and walls and can cause extreme health issues.
Share this article: