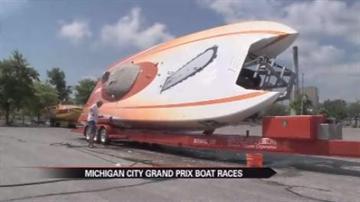 MICHIGAN CITY, Ind. -- The Michigan City Great Lakes Grand Prix opening ceremonies were held Thursday. The weekend event brings in millions of dollars to the local economy and is the only race of its kind in Michiana.

Crews are preparing their boats for this weekend's Great Lakes Grand Prix.

While they're wiping them down, Michigan City is cleaning up.

"The economic impact on the community alone has been over $20 million," said Jason Miller, La Porte County Convention and Visitors Bureau.

For 5 years now, staff with the Convention and Visitors Bureau have organized the race.

It attracts more than 90,000 fans from all over the world.

"This is kind of like NASCAR on the water," said Jason Miller.

Water that can get a little choppy.

Last year, waves were so intense the race was called off.

That shouldn't be the case this year, but the waves will make the race more challenging.

"It's different, and people are looking for something different," said John Carbonell, President of Super Boat International.

For Carbonell and his drivers, having a race at Lake Michigan is an opportunity to introduce the sport to new and old fans alike.

"A lot of people can relate to it, because they go out in their little Boston whaler, and they're flying maybe five feet in the air. We're flying as much as 15 to 20 feet up," said Carbonell.

The Grand Prix will be taking place all weekend long.

The competition is supposed to be elevated, this race is worth double the points for drivers!