Guns in the hands of criminals in LaGrange 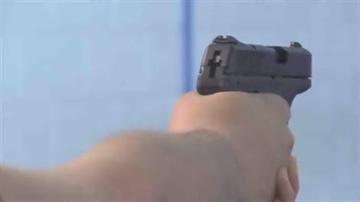 LaGRANGE, Ind. --  Sheriff Terry Martin of LaGrange County says a gun in the wrong person’s hands can be the difference between life or death.

He says his department works hard to keep guns out of the hands of criminals. But there have been countless times that the court has ordered him to return the guns to the offenders.

"What's frustrating for us is the fact that we go through all this to get these guns off the street and they end up back in dangerous hands."

Sheriff Martin says police arrest people for felonies, then the LaGrange County Court drops the charges down to a misdemeanor.

Indiana law says that is allowed, so at that point, the guns can be returned to the owner.

In the case of one offender, Russell Lewis, when he went to jail years ago, all 17 of his guns were given to his mother.

When she passed away, the guns ended up back in his home.

It was deemed unsafe for him to own firearms, yet he had 17 of them sitting in his room.

"It could have been a lot worse, that’s what’s frustrating, especially when we had these guns in our custody from an earlier crime."

He says in order to keep guns out of the wrong hands, the courts and law enforcement must work together, "We have got a system that works when we’ve got everybody on the same page."